INDEX ON ILLEGAL WEAPONS IN LEBANON 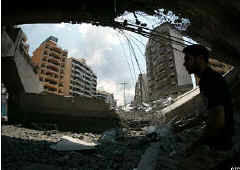 “How many people do you have to kill before you qualify to be described as mass murderer and a war criminal?"  Harold Pinter, Nobel speech.


A peace offer was vetoed just prior to the US / Israeli war on Lebanon.1 Since the war started, there has been much discussion concerning the use of (US) cluster bombs, bunker-busting bombs and chemical weapons – all illegal - presently being used in Lebanon. Some have also said illegal bombs are also being used in Palestine.

Those ruling the American Empire, supported by PM Blair2, have become mad with megalomania. The War of (sic) Terror is not the solution. Those responsible for the Iraq War, illegal kidnapping and detention without representation, and for the bombs used in Afghanistan, Iraq and now Lebanon need to be put on trial for War Crimes. Sanity, dignity, respect, integrity and peace urgently need to be reclaimed.

Our planet is 4,500m years old. Bill Bryson suggested that if one figuratively put this on the scale of a 24-hour clock, “humans emerge at one minute and seventeen seconds before midnight.” Those in the pursuit of total power and money should not use our precious time killing innocent people as well as the planet, but should find a less lethal form of pathological entertainment. We are rapidly, and exponentially, running out of time for our species’ survival.

I have put together an index of photographs, reports and articles which, at our peril, have been irresponsibly ignored by the corporate Mainstream Media.

Following is an Index of various reports and articles.

29.07.06. B. Joffe-Wait, Guardian. Made in the UK, bringing devastation to Lebanon - the British parts in Israel's deadly attack helicopters.

26.07.06. Berrigan / Hartung, Foreign Policy in Focus. Over the past decade, the United States has transferred more than $17 billion in military aid to this country of just under 7 million people. Who's Arming Israel?

29.07.06. Reuters. The announcement came two weeks after the administration said it would sell Israel its latest supply of JP-8 aviation fuel valued at up to $210m to help Israeli warplanes “keep peace and security in the region.” US planning $4.6bn in Mideast arms sales.

US Arms to Israel 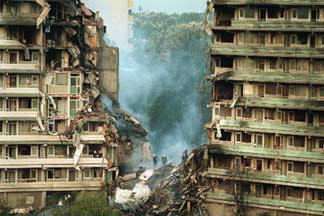 In October 1992, an El Al cargo Boeing 747 crashed into this apartment building in Amsterdam Bijlmermeer [edit correction]. Some one thousand people in the vicinity complained of health problems after the crash. It was later revealed by Dutch and Israeli sources that El Al Flight 1862 was transporting precursor chemical weapons substances to Israel from the United States, including dimethyl methylphosphonate, hydrofluoric acid, and isopropanol, in addition to depleted uranium. http://www.waynemadsenreport.com/

26.07.06. Channel 4 news. Tonight a surprise diplomatic rift has blown up between the United States and Britain over the shipment of bunker busting bombs to Israel through a British airport. Margaret Beckett interview (video).
Foreign Office ‘edited’ (sic) version of interview.

27.07.06. P. Graff, Washington Post. A newspaper said Britain had agreed to allow Washington to fly more weapons to Israel via its airports despite Foreign Secretary Margaret Beckett saying she was "not happy" about Washington failing to comply with procedures for such flights. US denies breaking UK rules on Israel bomb flights.

28.07.06. P. Webster, Timesonline. The Government will allow more American aircraft carrying arms to Israel to stop over in Britain despite private concerns that the Pentagon was “playing fast and loose”. Britain lets more flights land in Scotland.

29.07.06. BBC. Two more American flights carrying "hazardous cargoes" bound for Israel are to refuel at Prestwick Airport this weekend, it has emerged. Airport to handle more US flights.

07.06. Amnesty International. Obligations under international humanitarian law of the parties to the conflict in Israel and Lebanon ISRAEL/LEBANON: ISRAEL AND HIZBULLAH MUST SPARE CIVILIANS.

21.07.06. Relief Web. According to several witness accounts, cluster bombs may have been used by the Israeli forces over the last few days in south Lebanon, particularly in the southern suburbs of Beirut.The Cluster Munition Coalition (CMC) reports that the Israeli government has announced that it is reserving the right to use cluster bombs in its current intervention in Lebanon. Handicap International is concerned about the possible use of landmines and cluster bombs in Lebanon. 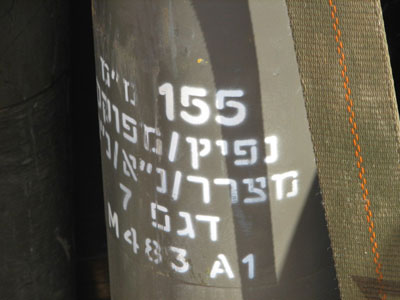 Close-up of a M483A1 DPICM artillery-delivered cluster munition present in the arsenal of an IDF unit in northern Israel. © Human Rights Watch 2006 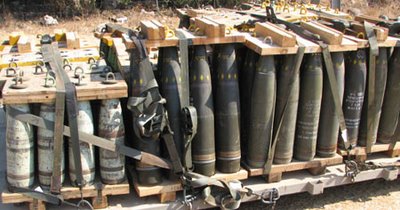 20.07.06. Kurt Nimmo, uruknet. Excellent short precis of illicit weapons. “Israel has plenty of other weapons, gratis the United States and its own burgeoning weapons program, but it appears it prefers to augment its arsenal with chemical weapons.” Israelis adopt poison gas ‘fashion.’ See Nimmo’s referenced url: Overview: Israel’s use of Chemical Weapons. 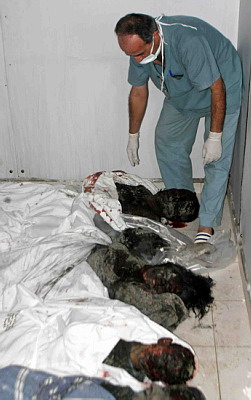 21.07.06. As-Safir Newspaper, uruknet. Do you know what kind of weapons causes this damage? CAN YOU HELP US, PLEASE! 3

22/23.07.06. W. Madsen Report / GlobalResearch.ca. “U.S. military intelligence sources have told WMR that the artillery shell shown below being used by an Israel Defense Force member in Lebanon, is a type of dual and multi-use weapon the neocons falsely accused Saddam Hussein of possessing. Although the canister artillery shell is marketed as an anti-land mine fuel-air bomb, its payload can also include the chemicals used in thermobaric bombs, white phosphorous weapons, and chemical weapons.” Photos. Chemical Weapons used against Lebanese Civilians. 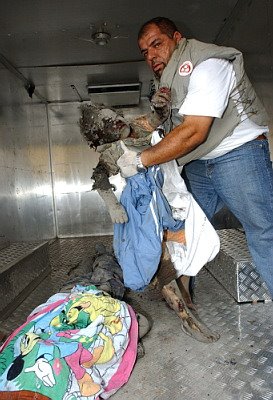 23.07.06. G. Myre, NYTimes. (Editor, Index: a source, who wishes to remain anonymous, says: “enlarge the picture of the Israeli artillery (scroll down). The pale green rounds in the foreground are WP, if US artillery markings are still what they used to be. The green rounds with yellow diamonds are beehive (flechette) rounds.”) Israel Presses Air Raids on Lebanon, and Its Ground Forces Move Into a Village.

23.07.06. G. Hoffman, Jerusalem Post. Knesset member Azmi Bishara (Balad) has accused Israel of such massive use of force in the conflict with Hizbullah that "it's like a nuclear bomb falling on Lebanon - the whole country is destroyed." MK Bishara: IDF attacks 'like a nuclear bomb on Lebanon.' 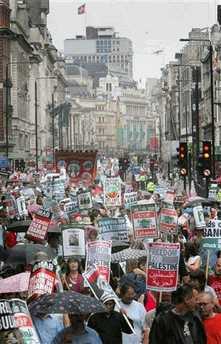 23.07.06. S. Meyer, Index Research. UK demonstration. Meanwhile, the US sends more bombs to Israel. These bombs appear to wreak the same human horrors as the phosphorus bombs used in Fallujah, Iraq. Lebanon vs. the BBC.

24.07.06. Zena el-Khalil, dnaindia.com. “So, let me ask this question: if Israel gets its weapons from the USA then by default doesn’t that mean that the USA is at war with Lebanon? Blogging from Beirut.

24.07.06. Mosaic / ICH. This video contains images depicting the reality and horror of war and should only be viewed by a mature audience. Uncensored News Reports From Across The Middle East. 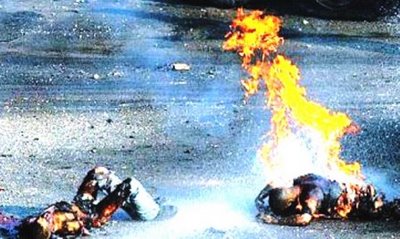 25.07.06. Democracy Now: Interview with Peter Bouchaert. “Just a few days ago we documented an attack, which took place last Wednesday, on the village of Blida, in which the Israelis used cluster munitions. Human Rights Watch has been very critical of the use of cluster and munitions by the U.S. military, because these are indiscriminate weapons. Basically what they are is one big shell, which opens up and drops a number of smaller bomblets over a very large area. Many of these bomblets don’t explode, so they effectively turn into mines.” Human Rights Watch: Israel Dropping Cluster Bombs on Lebanese Civilians.

25.07.06. J. Bone, TimesonLine. As civilian casualties mount, the UN is telling the belligerents that they might be guilty of war crimes. War crimes warning as civilian deaths increase. 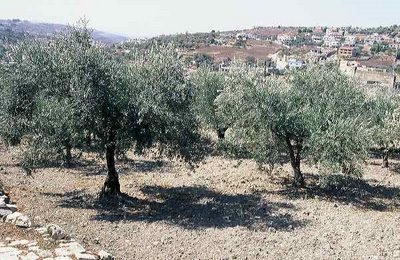 Bint Jelail before being destroyed by US bombs 4

26.07.06. R. Takieddin, dar al Hayat. Did the American people see on CNN the child whose face was burnt by Israeli phosphorous bombs in Lebanon? Lebanon's Children and Israeli Phosphorous Bombs.

26.07.06. IRIN. The Israeli military has defended itself following allegations by Lebanese government officials, doctors and an international human rights organisation that phosphorous bombs have been used, and have harmed civilians. Lebanon: Israel defends its weapons.

26.07.06. Pulse. Israel is using phosphorous bombs and cluster bombs against civilians. Letter from retired U.S. Senator on the invasion of Lebanon.

26.07.06. Aliran. There are even reports that white phosphorus, banned by the Geneva Convention, and cluster bombs have been used in areas populated by civilians. These are all war crimes and those responsible must be prosecuted in an international war crimes tribunal. Rice Go Home.

27.07.06. S. Assir, Weekly Ahram. … “it appears that in conflicts in the Middle East the law of the "most powerful" is the one that counts.”Above the law.

28.07.06. theage.com. LEBANON is investigating reports from doctors that Israel has used weapons in its bombardment of southern Lebanon that have caused wounds they have never seen before. Doctors suspect chemical weapons. 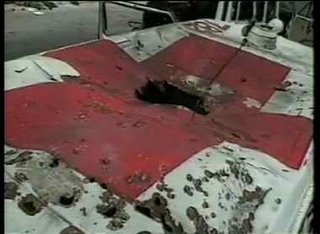 GENEVA CONVENTION I
(Protection for sick and wounded combatants on land)

Article 19: Fixed establishments and mobile medical units of the Medical Service may in no circumstances be attacked.

Not the Mainstream Media

10.05. Physicians for Social Responsibility Report: DU: Health and Public Health Issues arising from the Use of Depleted Uranium Munitions.

21.02.06. Free market news network / uruknet “The Preventive Psychiatry Newsletter has written to its subscribers telling them that the real reason the former Veterans Affairs Secretary, Anthony Principi, recently resigned was because he has been involved in a massive scandal covering up the fact that Gulf War Syndrome was caused by the use of depleted uranium, according to the SF Bay View. DU SCANDAL EXPLODES.

26.02.06. Robert Fisk, Independent / ICH. Something more serious is happening to our planet which we are not being told about Is the problem weather, or is it war?

William Lewis Film: Depleted Uranium weapons and the Gulf War Syndrome. What the Department of Defense doesn't want you to know. Beyond Treason.

6 minute Video. Blair and Bush: Killing To Go On Until We Find A Plan. Click to see here: More Time To Bomb

“All war crimes originate at the top.”
Dr. R. Crane.

[1] Israeli invasion of Lebanon planned by neocons in June (2006)
[2] 30.07.06. Observer. Cabinet in open revolt over Blair’s Israel policy.
[3] Following this publication, I sent the article to Jon Snow and Channel 4 news in the UK. I continued to alert them about the use of chemical weapons. There was no response. On 29 July, Alex Thomson reported: “Support for Israel remains strong. Is this because people are not being informed by the Media?” Ahh, I thought. Finally they will mention these terrible bombs. No such luck. The program focused on how “Israeli anti-war voices were being completely drowned out.” The western world remains, for the most part, ignorant of the illegal US weapons being used, as well as information about US weapon / financial support for Israel.
[4] 28.07.06. Dahr Jamail,, Mother Jones Chest -Beating While Losing the War.

See also: US occupation forces use WMD in Iraq:  http://www.brusselstribunal.org/WMD.htm


This research was first published by the BRussels Tribunal:  http://www.brusselstribunal.org/MeyerLebanon.htm
The url to INDEX ON ILLEGAL US WEAPONS IN LEBANON is: http://indexresearch.blogspot.com/2006/07/index-on-illegal-us-weapons-in-lebanon.html

Sarah Meyer is a researcher living in Sussex, UK. She is a member of the BRussells Tribunal Advisory Committee
Email: [email protected]